But first…what is E-Verify?

E-Verify is web based government data system that allows employers, or designated agents of employers, to compare information from an employers “Form I-9 Employment Eligibility” to the Department of Homeland Security and Social Security Administration records to confirm employment eligibility of the applicant. Not to be confused with the Social Security Verification System “SSNVS” which we talked about previously.

If you don’t yet utilize E-verify or even know what it is, you’re not alone. This government program was spawned from the Illegal Immigration Reform and Immigrant Responsibility Act of 1996, but has had a bumpy ride to usability and acceptance. Asid

e from initial voluntary testing, employers didn’t start enrolling in the pilot program until 2001. Employer feedback quickly demonstrated that a great deal of changes were needed. Since that time the E-Verify system has been overhauled for ease of use, accuracy and web integration needs. The federal government would like all U.S. based employers to use the system in order to prevent the hiring of undocumented workers. As of 2010 the system only serves 216,000 enrolled employers of the almost six million U.S. businesses. This lack of enrollment is due primarily to push back from many states refusing to require, and in some cases banning, its use.

Where does this leave most employers? Confused, to say the least. That doesn’t change the fact that some states currently require E-Verify’s use in varying degrees. Some require E-Verify to be used only by businesses that receive government contracts, others require it for ALL employers. Hefty fines are in place for those that are required to use it but do not, so it pays to know current state laws keep a close eye on new legislation.

Indiana- Bill 590: As of July 1, 2011 all state agencies, state contractors and state sub-contractors will be require to utilize the federal E-Verify program to confirm work eligibility status.

Map of States With E-Verify Requirements (provided by NumbersUSA.com) 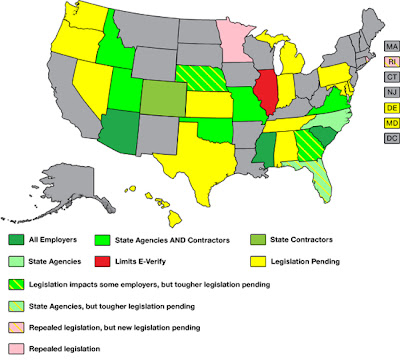